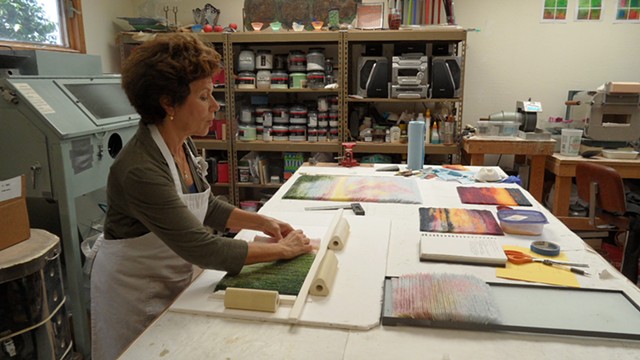 Susan J. Longini has been involved in the glass world for over 3 decades as studio artist, educator, and administrator.

She received her Bachelor of Fine Arts with a major in sculpture from the University of Michigan and did postgraduate studies in glass at San Jose State University and California College of the Arts. From 1986 to 2003 she was Adjunct Professor and head of the Glass Program at Ohlone College in Fremont, CA and Executive Director of the Bay Area Glass Institute (BAGI), in San Jose, CA 2002-2004. From 2000-2010 she was a member of the City of Fremont Art Review Board, in charge of awarding artists grants for Art in Public Places projects. From 2005-2016 she served on the board of the Glass Alliance of Northern California (GLANC), a nonprofit organization whose mission is to further education and appreciation of glass art. She is also Program Manager for boxART!, in charge of transforming Fremont’s 170 traffic signal control boxes into works of art.

Susan’s work is exhibited throughout the United States and is in public and private collections in the U.S., Europe, and Asia. She is a frequent lecturer, guest curator and juror. Her particular interest in glass is pâte de verre, literally “paste of glass”, which uses glass frits and powders formed by hand and placed in a mold, then fired in a kiln to produce one-of-a-kind sculptures.